It has become apparent that brother and sister have chosen doors for themselves.  Jinks has always ruled the back deck sliding glass door (most photos of them both at the back will show him at the ready and Sophie a foot or so behind).  But what’s a non-meowing kitten to do?  The only other door is wooden.

Well, Sophie started out by insisting on going out the front door even if the back was already opened for Jinks.  Then one day I heard a faint meow type sound and thought one of them had gotten stuck in the garage (which has a door to the house), but no.  I heard it again and tried the front door.  There she was and in she came.  Now she fairly frequently will meow at the front to come in – still this faint sound, though sometimes she gets more gumption and is louder.

But I still didn’t understand the definitiveness of whose door was whose until today.  I was in the front yard and both cats were there (unusual, usually only Sophie is out front).  It was before either had been fed their morning meal.  As I went to the front door and opened it, Sophie bounded in.  I glanced over to call Jinks to come in also, but only heard an unidentified sound.  I had a hunch, but didn’t know for sure until I turned my head through the house to the closed back deck sliding glass door and sure enough, there was Jinks.  The sound I had heard was Jinks racing through the bush, over the side fence and around to the back in the time it took me to turn my head.  I obliged and walked through the house and let him in.  Obviously he is fully aware that the front door belongs solely to Sophie.

p.s.  Sophie is still allowed to come in and out the back.  Jinks does not own the back door.  It’s she that rules the place even though Jinks is a big hunk of a guy.

Sophie disappeared.  Not unusual for her.  But then a couple of days passed.  Still, multiple times she has been gone that long before and has always happily shown up with that look of “of course I’ve been gone, why wouldn’t I?” on her face.

I only started to worry when her brother started to act weird.  He started wanting in and out in a much quicker manner than normal.  It dawned on me – he was looking for her.

And so I began to search.  I called and walked the neighborhood.  I know we have coyotes in the area, but she is a smart girl and I tried to not contemplate that option.  Not only could I not find her, I couldn’t see any other cat either.  The only time I could see Jinks was when he was at the sliding glass door wanting in.  As soon as he would go out again he would disappear.  Another day passed.  I walked the street again and came across my next door neighbor.  She is a cat lover with cats of her own and a luscious garden.  She knows our cats well.  Within ten minutes of telling her that Sophie was missing, she calls over the fence that I should come because she has our cat in her garage.  I went around and in her garage side door and she said “Listen!”, and there it was, a very quiet small meow.  I called Sophie and up she came to me.

That little girl had been scared by some excavating that another neighbor had been doing and had raced into a slightly ajar door and gotten herself locked in the next door neighbors garage.  For three and a half days.  I carried her home, bruising her ego.  I put down fresh water and food and she drank for about five minutes totally ignoring the food.  I pet her.  Then she wanted out.  Well, I didn’t want to let her out, but our cats are outside cats and it just seemed mean to keep her in.  I opened the door hoping that she had learned her lesson – speak up or be stuck (I’ve mentioned, haven’t I, that neither Sophie nor Jinks meow much at all).

The day was warm and sunny.  I went about my business wondering when she would show up again. The next thing I see out back is Sophie sleeping in the sun on the shed roof off our back deck with Jinks right beside her.  She stayed there and slept for eight hours.

Jinks stayed by her the whole time. She just slept, he slept and stood guard.

Upon discovering a match up of cat qualities between our cats many miles apart – Dan informed me of the following poem he had written.  Since it seemed to go right along with my cat pair, he graciously has allowed me to reprint it here.  Enjoy!

our tuxedo kit kat yowls and mews
his hopeless owners to abuse
such a ruckus racks our threshold
i cringe, i shudder and then i scold
but still our feckless kit kat scratches
unlock the locks!  unlatch the latches!
then there sits he insouciant…yawns
a monarch to his grateful pawns
his royal furriness has nerve to grouse
then saunters round behind the house
he’s at the front, he wants the back
i’m going to have a heart attack
he’s at the back he wants the front,
(my wife calls this his favorite stunt)
we never should have picked the runt
i bang my forehead and implore
for godsakes, kat! just choose a door

The weather has turned cooler and that has brought the kittens in.  The chairs and heat vents have been abandoned…it’s couch time. 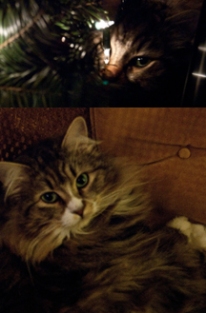 Normally Jinks and Sophie sleep in their own but same spot for a couple of weeks at a time – neither would dare to take over the others’ location.  Eventually one will decide to pick a new spot and the other will follow suit.  Now, however, there’s  a Christmas tree in the house and there is one coveted  spot.  It has everything a cat could want.  It’s got warmth (even though it’s on top of a vent that’s covered with cardboard and a brick to not dry out the tree), it’s a great hiding spot, it has wonderful peek out ability, and incredibly low access for humans.

This spot is different.  This spot gives power to whomever is there.  Never has one cat challenged the other over use, but if the spot is empty it’s taken over by whomever can get there first.

As can be seen, tonight Jinks is top cat and Sophie is relegated to the chair.

“Shelter From the Storm” at 5 pm after being out in the sunny but cold 34 degree fahrenheit day.  One kitten rounds the center cabinets to the north, the other rounds the south bend.  Both end up at the food bowls.

If I go into the kitchen Jinks will jump up on the stool.  I’ll decide to pet him on the top of his head but as I bring  my hand away from him he puts his paw up and pulls my hand back to him so I’ll rub his belly from the front (total Maine Coon behavior, using paws to get their way).  Impatient and lightly meowing for food they still have to wait until 6pm.

Finally dinner is served.  Jinks jumps right in but Sophie, most of the time, will watch her brother start in eating and look on with disdain even though she has been hanging around waiting for the event as much as him.  She waits and waits until I can’t take it any more and pick her up and put her in front of her bowl.  (If I don’t, her brother will finish his food and move on to her bowl and I’ll be stuck dishing up more food.)  She looks up at me like – aren’t you forgetting something?  And until I pet her she will continue to stand there ignoring the food.

Jinks and Sophie are both hunters.  Although you can’t tell from the photo:

Sophie leaps in the air.  She catches and eats moths (and one bird – don’t be mad at me or her, be mad at mother nature).  It freaks me out when randomly at night I hear a thud against the window – then I realize it’s Sophie grabbing with her paws against the glass.

Jinks also leaps, but doesn’t seem able to catch anything up there even though he can get awfully high.  He does, however, catch critters.  Three moles in three days.  Go Jinks.

Sophie has another name.  It came in the side door and now must be added to the list:

They were just kittens whose mother came in from the cold to have her babies.

The smart one and the cuddly one.

No basing our choice on just looks – we’d learned that lesson years ago – though they were cute.  They needed a home, we needed the love.

And then to name them.  It was a hard decision (did we make a decision?).  The brother is Jinks or Bubba or the reincarnation of Big Cat.  The sister is Sophie or Dinah or Little Girl.  I prefer Little Girl so I don’t get in between husband and daughter choices.  Let’s just say they are multi-named and move on.